This page is dedicated to the memory of USS Caperton Sailors. Many of these tributes have been provided by family members of the Sailors. If you would like to provide a tribute to a sailor who has passed on, please email it to me at This email address is being protected from spambots. You need JavaScript enabled to view it. and I will add it to this section. 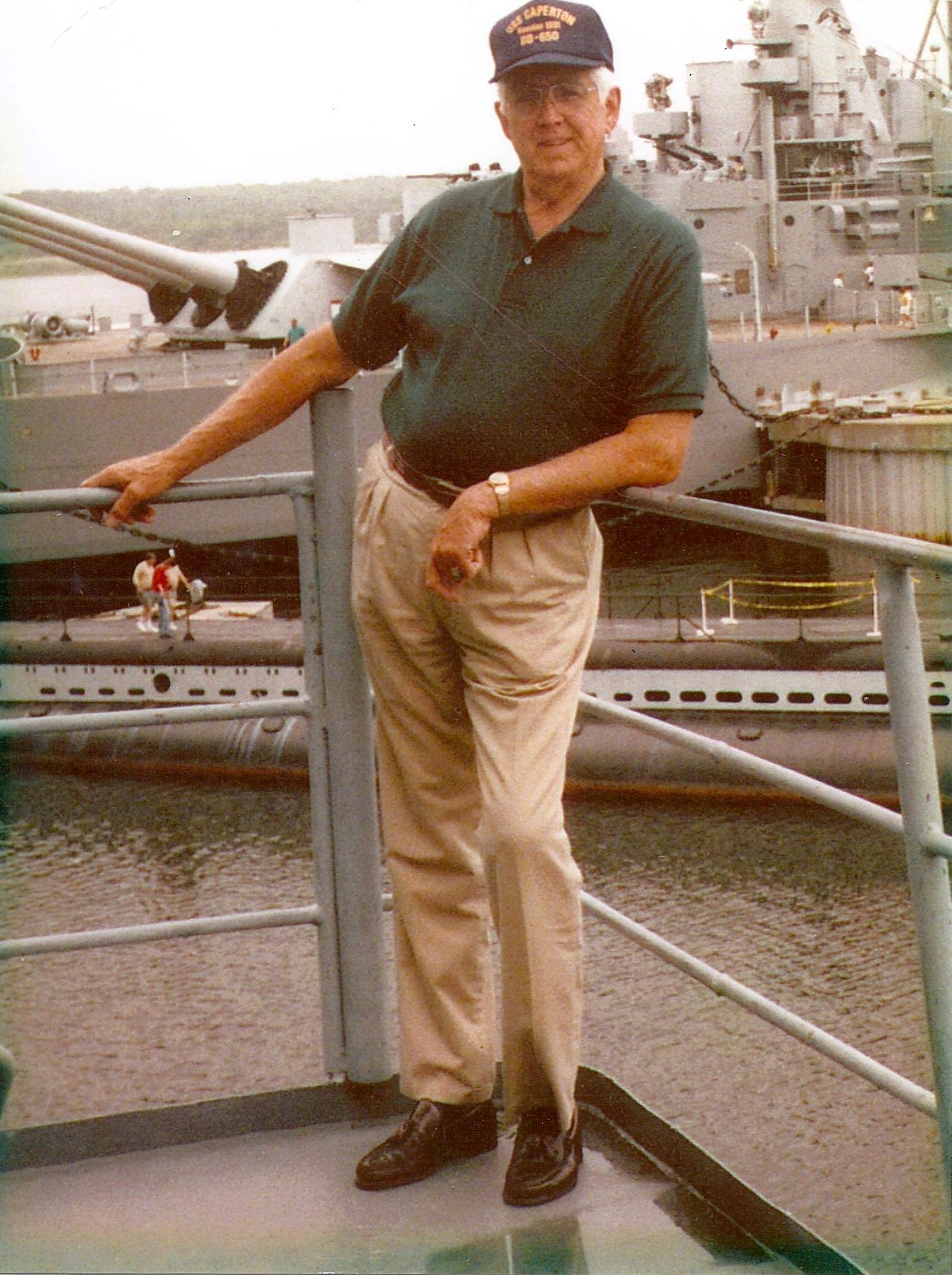 greatest generation who had to be prodded to speak of his experiences during the war. My father and I would sit down to watch a war movie and I would begin asking him questions and soon the story I was hearing was far better than any movie I could watch. He was so very proud of his time on the Caperton and proud to refer to himself as an ‘Old Salt’. He joined the Navy at 17 and a half with the grudging consent of his father after threatening to run away and join the Royal Canadian Navy.

retired regional insurance Vice President, was reunited with his wife Mary in heaven on December 21, 2020.

Robert was Vice President of Marsh & McLennan Inc., international risk management brokers, at the time of his retirement in 1987. He married Mary L. Mueller on November 8, 1952 at St. Therese Church. They shared 65 years together until her death in June 2017. They met at the marriage of Robert’s college roommate, where he was best man. Interestingly, later that day, she leaned over to a girlfriend and whispered, “that’s the man I’m going to marry”.

Earl Hawkins, died Sunday, Dec. 4, 2011. I had the honor of discussing his life aboard the USS Caperton on many occasions, and he was a constant cheeleader for this website and will be greatly missed.

A number of years ago Earl turned over his own website to me which to this day is still hosted by USSCaperton.info you can visit his site at www.capertondd650.com

My Dad, Vernon Follett passed away on April 7th from complications after a fall he took. He leaves behind my mother, Marilyn Follett, seven children, nineteen grandchildren and seven great grandchildren. He served in the Navy from 1951 to 1955 and was assigned duty on the USS Caperton. The newsletter that he received was always on the coffee table and I wanted to take this time to share his story. He was proud of his years of service in the Navy and his many friends he met while aboard the Caperton. He spoke about his experiences often. My mother and he just celebrated their 60th wedding anniversary this past February. Just a quick story for you, while he was in the Navy my mother told him that in port he was allowed to fool around with any doll he wanted to as long as he brought her home, so needless to say in our living room we have a cabinet filled with 25 to 30 dolls that my dad brought back to my mom from every port he stopped in.

We will Miss you Fred...

I was just notified by his wife of the passing of Fred Bandy, former USS Caperton Sailor, and Editor of the USS CAPERTON Newsletter. I have been in touch with and maintained a relationship with many of the "Capes' sailors over the years. Fred was one of the men at the top of that list, he and his wife regularly emailed me to keep the roster current, and to make sure I knew what was happening with the 'goings on of the Sailors association. In return I was constantly sending emails I recieved from sailors who had found the website and were asking for info, to Fred and Marie Anne so that they could get them to the right people. Fred loaned me his prized copy of the '53 World Cruise book so that I could scan it, and we were in the process of getting a reprint finalized when he passed. To a large extent it was the encouragement of people like Fred and Marie Anne that kept me going on the USS Caperton Site. I will miss you Fred, and thank you for everything you have done.

R.L. was a long time Truck driver and long time Grocery Store owner. Dad retired from the store business in 1973, bought 35 acres of land, For some time raised cattle.

Our dad was so proud to have severed on the USS Caperton. He would always talk about the battles the ship was in, and how mean the old man was. I think he said his name was Miller. He could talk for hours and we would keep us quite just to hear his stories. Mother would talk about the mail she would get from Dad, (always sections cut out of the letters)

Born on January 22, 1922 in Hudson, he was the son of the late Frank and Minnie (Clark) Francis.
He was a life long resident of Hudson.
Donald was predeceased by his loving wife, Mary Frances Francis, and his brother, Elden Francis.

Paul Ehrenfried, 87, from San Carlos, California, on April 18, 2008. B.A. in economics/journalism and a member of Phi Kappa Sigma fraternity, Maine Masque, orchestra, Student Senate, Radio Guild, band, and worked on the Maine Campus. He was an early member of the Maine Bears jazz band. He was a veteran of World War II serving from 1942 until 1946 in the Navy aboard the USS Caperton in the South Pacific Theater and was involved in major battles against the Japanese.

Nicholas Bernard Mangione Sr., of Hunt Valley, died from complications of a stroke at the Greater Baltimore Medical Center on Sunday. He was 83.

Born in Baltimore Feb. 17, 1925, Mangione was the son of Sicilian immigrants Luigi and Maria Villano Mangione.

He attended parochial schools in Baltimore before joining the Navy to serve on the destroyer U.S.S. Caperton in the South Pacific in World War II, according to his son, Sam Mangione.

Herman W. Gullett, a snipe on the U.S.S. Caperton during WWII, passed on April 24, 1999 of giloblastoma Grade 4 (invasive brain cancer).

GILMORE, JR., JOSEPH H., 80 -of Longport, died Friday, October 1 after a long illness. He was born in Pittsburgh, PA before moving to Ventnor in 1930. He attended Georgetown University before enlisting in the U.S. Navy to serve on the destroyer U.S.S. Caperton in World War II.

To glimpse the character of Frank Joseph Vodhanel, who died of Leukemia on Saturday at age 81,

Just a brief note to inform you that my Dad, Walter Bucklad, passed into final peace this past Sunday, November 27th, 2005, after a long struggle with complications due mainly to Diabetes.

On behalf of myself & three brothers, It is with regret I inform you of my father’s (Carmen Romano) passing on August 20, 2006, losing his battle with lung cancer. My father proudly served on the U.S.S. Caperton between the years 1943-46.

Martin W. Jensen from Westbrook, Maine. He served on the Caperton from 1951-1955 during Korea. He passed away in October of 2010 from pancreatic cancer. My mother had died the year before. He lived in Westbrook and was greatly loved and is missed by all his friends and family. I have attached a silly picture of him fooling around at a gift shop when he visited my sister and brother in law in AnnapolisHe was a great guy and had a wonderful life.

It is with great sadness that I inform you of the death of Walter Brady who served on the USS Caperton in 1957-1958.

Walter, my "life partner" of 23 years, and I attended the reunion in Bath, Maine in the summer of 2000 and enjoyed it very much. In the summer of 2006, he was diagnosed with a very aggressive brain cancer. Walter battled cancer in his characteristic heroic but understated fashion. He died at my home in Cambridge, Massachusetts on 23 January 2007 at the age of 73 years.