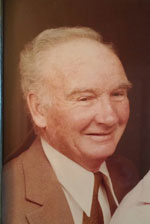 R.L. was a long time Truck driver and long time Grocery Store owner. Dad retired from the store business in 1973, bought 35 acres of land, For some time raised cattle.

Our dad was so proud to have severed on the USS Caperton. He would always talk about the battles the ship was in, and how mean the old man was. I think he said his name was Miller. He could talk for hours and we would keep us quite just to hear his stories. Mother would talk about the mail she would get from Dad, (always sections cut out of the letters)

Of the 3 of us, we all joined the service. David, Air Force, Robert, Navy and Paul, Navy. He was also proud of the way we followed in his footsteps. Our Mother (Jean passed away on December the 4th 2009).

R.L. gone but not forgotten!!!